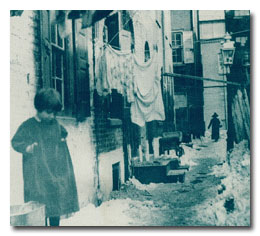 The Octavia Hill Association story begins in 1896. Philadelphia was a booming industrial center with all of the progress and the problems of the world’s largest cities. As the urban chaos grew, so did the number of inadequate, overcrowded buildings.

The poor were crammed into crudely constructed shacks and one room apartments. Defective drainage, offensive privies and inadequate water supplies made living in these slums unsanitary and, in many cases, unbearable.

Philanthropy and Four Percent
Poverty had been a part of Philadelphia since its founding but few charitable organizations had been helping the poor. Now, as the new century drew near, waves of new immigrants poured into Philadelphia. The crisis cried out for reform. There was a need for a new vision, a concept that went beyond simple benevolence. The city needed an idea that spoke to the complexities of poverty itself. 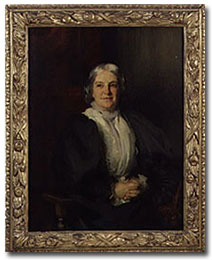 Activists in Philadelphia looked across the Atlantic to the groundbreaking work of Octavia Hill, a pioneer of British housing reform. Hill’s work among the London poor had convinced her that environment was a major cause of poverty. She felt that if we could change the environment by improving housing and building parks, playgrounds and better schools, we could eventually eliminate poverty. Through a revolutionary approach, Hill combined her charitable work with a for-profit business.

With the help of investors, Hill purchased and renovated London houses, charged tenants an affordable rent, and was able to give investors a modest return. Her philosophy went beyond providing a roof over her tenants’ heads – decent shelter was just part of the equation.

There was also a social component. Hill instructed her residents in sanitary maintenance. She encouraged them to practice what she called “the simple virtues that would make them better people.” And she insisted on the importance of a close relationship between tenants and the landlord, visiting them personally and employing what she called “the friendly rent collector.”

Inspired by Hill’s success in London and appalled by Philadelphia’s housing conditions, a group of determined Philadelphia women crossed the Atlantic to study under Hill.

Founding Philadelphia’s Octavia Hill Association in 1896, the group purchased neglected row houses, improved them, and rented to people they thought could best maintain them. The OHA and its small group of investors provided clean, sanitary, and safe living. At the same time they made a small profit, coining the phrase “philanthropy and four percent.” 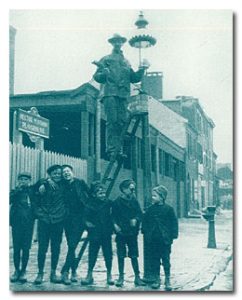 Never Back Down From a Huge Challenge
The principles of the early OHA were simple and consistent:
• Renovate existing housing rather than build new structures.
• Build communities by buying in groups of three or more row houses.
• Install plumbing and flush toilets.
• Create simple paint and plaster interiors free of germ-ridden carpets and wallpaper.

Like their predecessors in London, the key to OHA’s success was the concept of the “friendly rent collector”. And as one of few friendly faces in the neighborhood, OHA employees in London and Philadelphia became the cities’ earliest social workers. They provided less-educated tenants with instruction in cleanliness, sanitation, sobriety and good housekeeping. They also emphasized the importance and responsibility of making regular payments, working with neighbors, and banding together to provide a safe community when surrounded by malicious influences.

OHA’s two most important figures were Hannah Fox and Helen Parrish – both prominent Quakers and social activists. Parrish was so passionate about the social component of her work that she would actually go into tenants’ apartments to remove liquor bottles and insure other values of thrift, sobriety, and cleanliness.

Great Ideas Continue To Thrive
The first clusters of OHA houses were in an area bounded by Lombard Street, Washington Avenue, Seventh Street and Front Street. But it wasn’t long before the Association purchased and renovated houses in Germantown, Kensington and Manayunk. 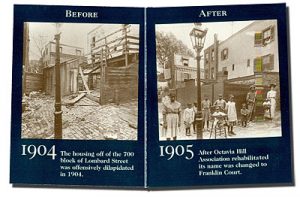 The Association flourished in its first 20 years and prompted the formation of a new corporation called The Philadelphia Model Homes Company. This division built 48 innovative new units in Philadelphia’s Port Richmond section in 1915. These townhomes were placed around a courtyard to incorporate open green space and to ensure a feeling of community.

By 1929, the number of OHA owned and managed properties had climbed to a staggering 450 units.

The 30 years between 1950 and 1980 marked three continuous decades of successful operations and major development in the Roxboro section of Philadelphia.

By the mid 1980s and early 90s, new development accelerated and OHA built the new 60-unit Bancroft Court Complex in North Philadelphia. We later constructed new units in Point Breeze. Several of these were developed for home ownership in conjunction with YouthBuild, a job training program employing many neighborhood young people.

Late in the 1990s, OHA experimented with a unique partnership with the Women’s Community Revitalization Project, establishing the Family Resource Center at the Bancroft Court Complex. Working to help improve the lives of tenants, on-site social workers offered needs assessment and counseling in areas such as welfare to work, budgeting and life skills, and domestic abuse. The program was supported with grants from the Ford Foundation and the Temple University School of Medicine.

The Octavia Hill Association has come full circle. The friendly rent collector is now the association property manager, based in a site office.

Partnerships help us offer job training, access to programs and information, and assist our tenants to help themselves and end dependency on welfare.

Our people are hired both for their professionalism and for their genuine concern for helping motivated people build a solid credit history and live in better conditions than they could otherwise afford.

Octavia Hill Association has always served the Philadelphia community, and in this current housing market, this work has rarely been more important.